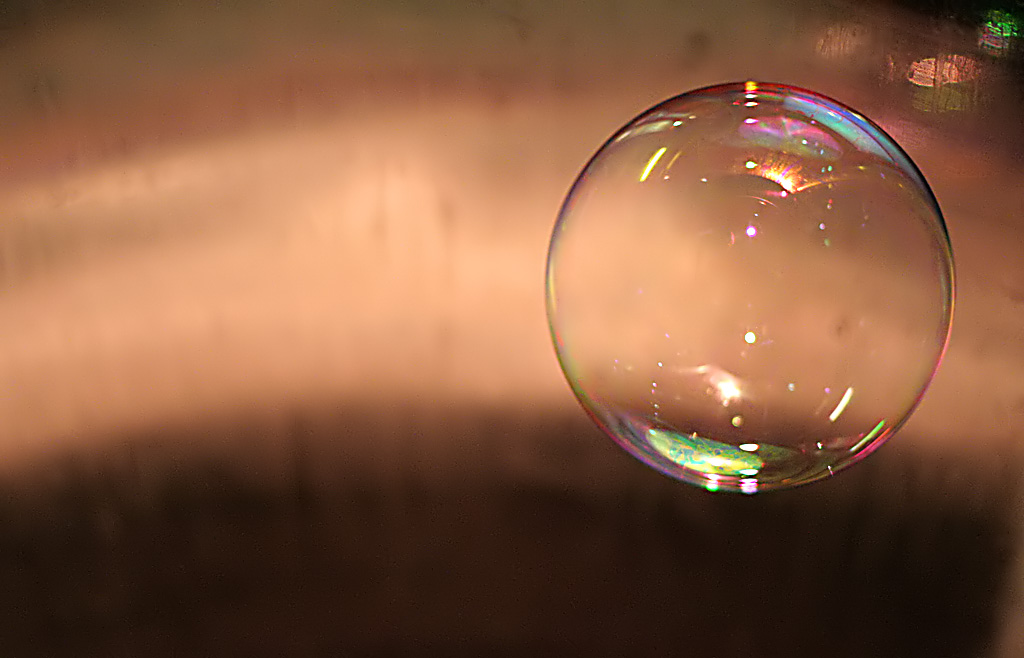 At night she lies in her dusky bed and blows bubbles. They expand on the ridged loop of the dipping stick and with a puff of her breath they float away, dozens at a time.

I hop around the room, dodging the piles of claustrophobic clothes on the navy-blue carpet, trying to clap the bubbles between my hands. But there are dark dancing shadows on the walls, and for each bubble I pop she creates ten more.

She arches her neck, tips her head backwards into the pillow and takes a deep breath. Her next bubble keeps on growing and growing in the space above her, fluorescence swimming on its meniscus until it reaches the size of her head.

I step from side to side, waiting for her to release. The bubble keeps expanding.

With a jolt of her body, she lets it go, and it floats towards me soapily, teasing me. It reaches almost to the ceiling, a wet sphere drifting in the cosiness of the room.

The giant bubble reaches me. My insides are fizzing. I step into it, one foot after the other, fingers pushing gently until the bubble allows me in and swallows me up.

She sits up on the duvet and laughs. She closes one eye and looks at me with the other through the aperture of the plastic dipper.

I look back at her from inside the bubble. Her body is framed in purple now, blue, mother-of-pearl; never static, always shifting and shimmering.

She holds the little pot aloft with one hand and slowly swirls with the other, seeking more soap.

The room swims in the bubble, just as I do: as soundlessly and weightlessly as an astronaut.

She puts the stick to her lips again and exhales: this time a stream of tiny bubbles, a jet of invisible sapphires is fired straight at me.

I reach a hand towards them, towards her dissolving outline and towards the rim of the bubble which surrounds me, but as my fingers brush the intangible edge, it pops.

She sighs. Her body returns to its normal colours. The soap drips down onto my socks and seeps into the carpet around me.

I watch silently as darkness refills the deep blue space where the bubble once was.

Sasha Ockenden studied French & German literature at the University of Oxford, where one of his stories was published in the Failed Novelists Society’s ‘Failed Anthology’ and he won an international DAAD prize for creative writing in German. His flash fiction pieces are forthcoming in ‘Flash Flood’ and ‘Riggwelter‘. He is currently based in Berlin and still working on becoming a failed novelist.